I have a new, rugged, wristwatch in my life.  It's called the Casio Tough Solar and it will be perfect for when I go mountain climbing, swamping, parachuting. and desert exploring.  It also goes well with khaki pants on business casual days.


Design.  The design of the Casio is hard core military.  It's brown.  It's made to blend into a wooded environment.  It's also muscular with a pumped up plastic case that can take hard knocks.   It looks rugged enough to be a G Shock alternative. 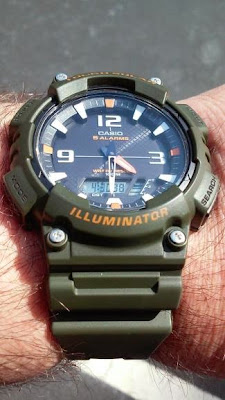 The design features white batons to mark each hour.  They angle down and in on the sloped channel ring.  White numbers denote 12, 3. and 9 o'clock.  The numbers and hands have lume.  A small digital watch read out dominates the six o'clock position.  Only the digital clock is backlit when the A button (at two o'clock is pressed). 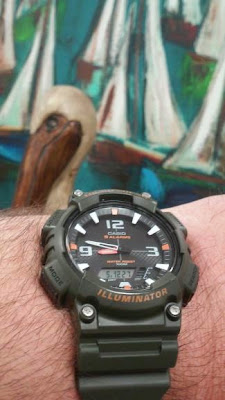 Construction.  The Casio Tough Solar is tough.  A raised plastic bezel protects the watch crystal.  It has a stainless steel caseback that is secured with four tiny Phillips Head screws.  The watch has 100 meters or 10 BAR water resistance. 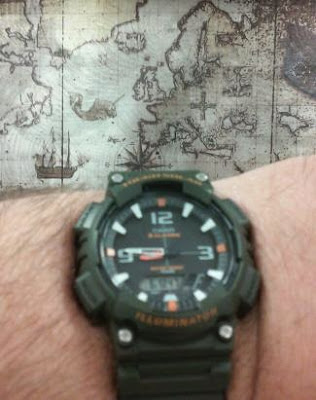 Dimensions.  This watch is only a tad bulky.  It's dimensions are fairly normal.  The case diameter is 46 millimeters and the case is 12 millimeters thick.  The band is 27 millimeters wide. 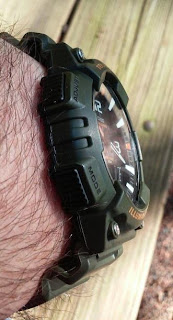 If this watch has trouble fitting under a dress shirt cuff, it's because it isn't a dress watch.  It has lots of buttons and textured surfaces to prevent it from easily sliding under a sleeve. 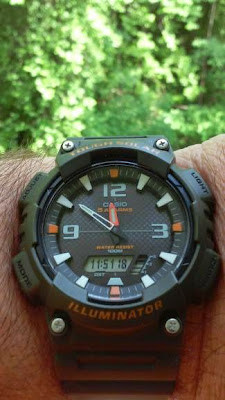 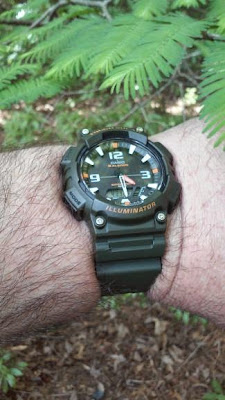 Drawbacks.  This watch is green. If you aren't a little green army man, you might want it in another color.  It is also available in black.  This watch is not set via a conventional winding stem.  Instead, you set the digital watch and the hands automatically adjust to follow.  It looks cool in action, but you have to read the directions.  This watch has no second hands.  You have to rely on the digital functions to see the seconds tick by.  Finally, this watch does stay powered as long in the dark as a Citizen Ecodrive.  It will probably run for days, but certainly not weeks. 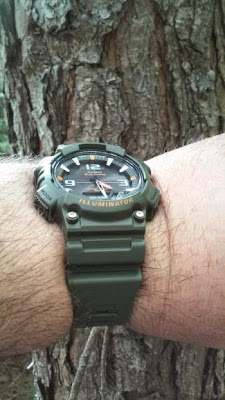 Overall, I like the Casio Tough Solar very much.  It's a step up from the venerable Casio Forester.  Most importantly, it's a great watch for adventuring and banging around.
Posted by GatorDude at 12:00 AM