What watch are you wearing during the Corona shutdown?

For much of this Corona virus (Covid-19, Sars2, whatever) shutdown, I haven't worn any watch at all.  I wasn't going anywhere.  If I did, I wasn't going to get out of the car.  At most, I thought, a fast food worker might get a quick glimpse of my wrist as I clumsily maneuvered my ATM card into a terminal awkwardly mounted at a drive through window.  But, lately, I've been wearing my Tissot Carson Powermatic 80.  It's a timepiece that my wife bought me as a gift and it feels good to wear it from time to time. 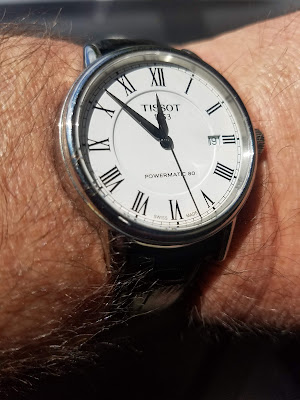 Even, if we are in a shutdown, time keeps on ticking, ticking, ticking, into the future.  You might as well pass the time wearing a watch you enjoy.  This Tissot watch cost a significant amount on our budget and it means alot.  It's also nice to have something "Swiss Made" in my collection. 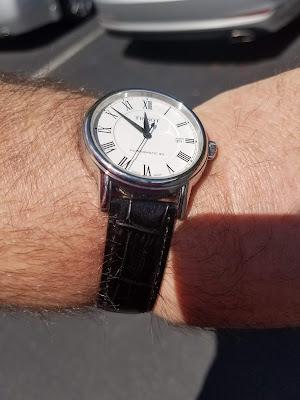 It may be awhile before I'm fully back in the swing of things around the neighborhood, but there's no reason not to wear a nice watch.

Posted by GatorDude at 8:05 PM No comments: 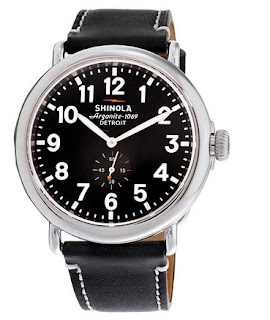 Unfortunately, when it comes to watches, there aren't many watches made in America today.  Nevertheless, if we are going to start down the road to economic recovery and employment opportunities for all Americans, we need to start somewhere.

I'd love to start with a luxury watch like this Shinola Detroit Runwell 47mm.  It's a quartz watch with a lustrous stainless case, a luxurious 24 5/13 millimeter leather band, and a double-curve sapphire crystal.

The watch would come in a beautiful wooden display box with a booklet.  It would truly be a dream watch.  Best of all, it would be assembled with pride in the United States using a mix of American and foreign components.  The watch represents a small step towards bringing a watch manufacturing industry back to the United States.  It's a step worth taking!

Posted by GatorDude at 10:51 PM No comments:

If you have an Louisiana State University football fan on your Christmas shopping list, this is the year to get them some gear!  After decisively beating the Georgia Bulldogs in the 2019 SEC Football Championship game, they are off to compete for the National Championship.  This is a great season to commemorate with a wristwatch.  Unfortunately, supplies are running short.  Here's a nice looking casual watch from Suntime.


An undefeated run through the SEC is an amazing achievement!  It'll be fun to watch them charge through the College Football Playoff and compete for a National Championship!

If you are looking for a really nice Christmas or Hannukah gift for a Star Wars fan, Citizen watches might have just have you covered this holiday season.  They have recently released a collection of really great looking limited edition Star Wars watches.


These watches cover iconic characters like Luke Skywalker, Darth Vader, Hans Solo, and Bubba Fett.  They also have a watch dedicated to the Death Star.  Each watch is powered by the famed Citizen Eco-Drive movement which uses solar power to power the watch for months at a time.  I personally love Eco-Drive watches because they never need batteries or winding.  However, the Eco-Drive movement does tend to drive up the price tag.

While these watches are dedicated to a Star Wars theme, there is nothing cheap and cheesy about them.  They have subtle designs that would look good in any setting.  Each watch is a limited edition.  For example the Luke Skywalker watch is limited to 1977 watches to commemorate the year of the original Star Wars move release.

I've covered plenty of Star Wars watches on this blog.  I've included Accutime Millenium Falcon Pocket Watches, inexpensive Stars Wars watches, and even Casio watches that just remind me of Star War.  These watches from Citizen are the real deal and would be an excellent choice for a professional.

This summer, I received an interesting watch for my birthday.  It's a beautiful watch that sits right on the border between fashion and practicality.  It's a Citizen Eco-Drive Black Ion-Plated Axiom Watch.

If you like black, this Citizen Axiom watch is your watch.  It's a black watch with a black bracelet, a black case, a black  dial, and black hands.  As the recipient of this watch, my main question was:

Can I read black hands against a black dial?

The answer is a definite sometimes.  First you have to acknowledge that this watch is totally useless at night.  If it's dark, you won't be able to read this watch.  However, if you are in the sunshine or indoors in a room with artificial light, you should be able to read the hands. 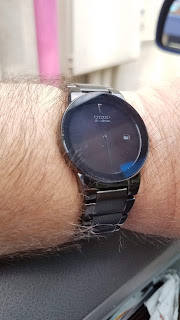 
This watch has comfortable dress watch dimensions with a 40mm diameter case.  The band is a masculine 23mm wide and the case is 8mm thick. 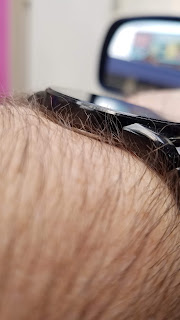 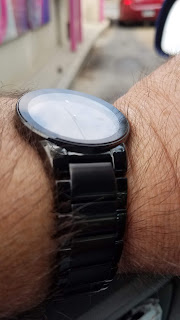 The watch uses a quartz movement powered by the Citizen's venerable Eco-Drive system.  With a full charge, this solar watch will run for six months in total darkness.  This makes it a very long lasting solar watch.  You can leave it in your sock drawer for a long time.  I suspect that Eco-Drive watches will eventually take over my watch collection.  I simply love the idea of never having to change a watch battery. 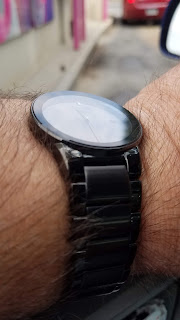 I really like this watch as a dress watch for work and social function.  Since this Axiom watch is not as easily readable as some of my military-style watches, I generally reserve this one for bright days, work at the office, or for special occasions.  It's an interesting watch to add to your collection.  You won't find a blacker watch around!

If you are ever going to get a 65-foot sailboat with endless decks of beautiful teak, you are going to need to visualize yourself as a yachtsman.  Fortunately, Armitron can help with this Men's Multi-Function Dial Gold-Tone Bracelet Watch.  They call it model 20/5144BKGP, but I think you could call it your yachtman's watch.  Here's a quick photo of it that I took at Walmart. 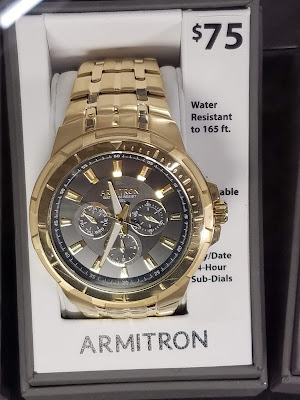 This watch has a stainless steel case, a mineral crystal, and 165-feet of water resistance.  While this isn't a watch for snorkeling or diving, it would be just fine for short periods of recreational swimming. 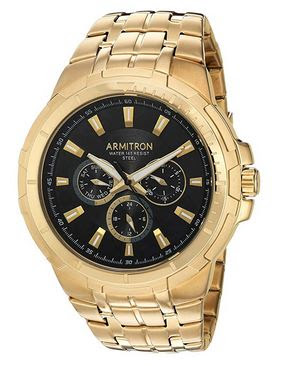 Despite the rich yachtsman looks of this timepiece, it is actually a very practical watch. I think this Armitron would make a great gift this Christmas for anyone who likes a gold-tone watches. It offers a brilliant gold tone in a dressy but functional watch from a well-known company. At less than $100, this Armitron also comes with an affordable price tag that won't crush your gift giving budget.

Posted by GatorDude at 12:33 AM No comments: 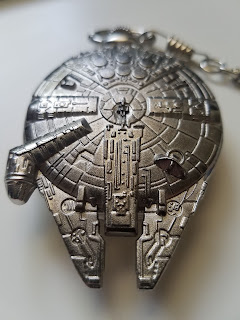 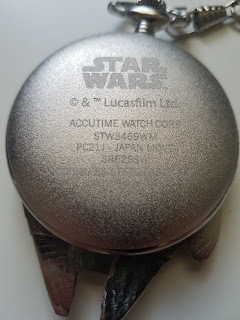 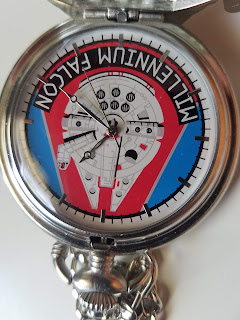 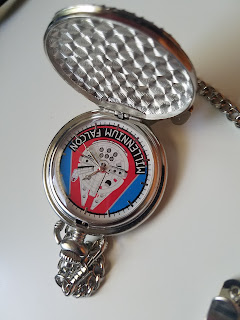 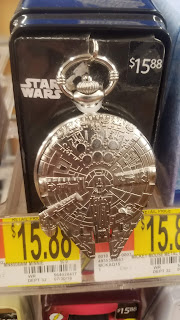 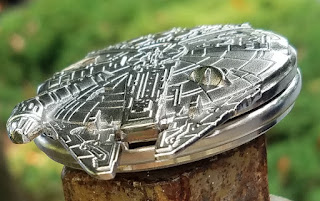 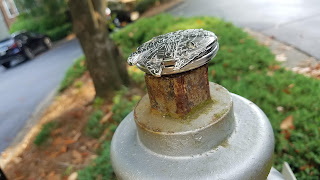 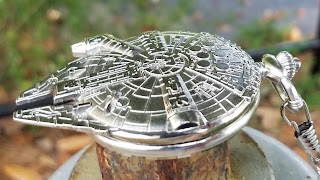 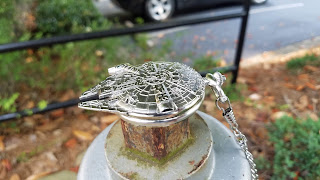 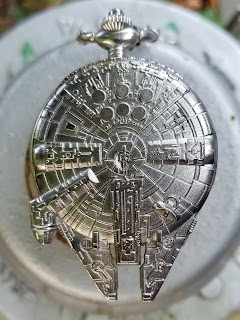 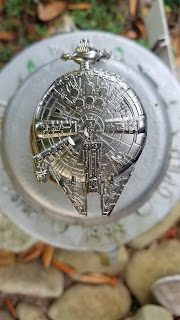