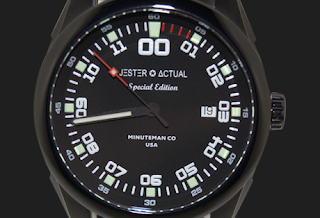 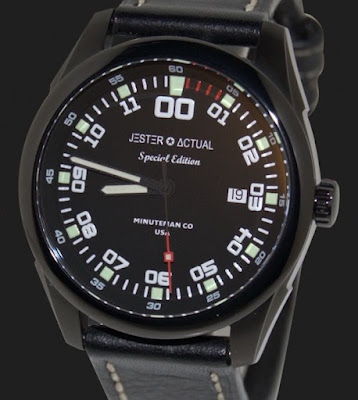 Each Jester watch has a 42 millimeter diameter black PVD-coated stainless steel case (not counting the crown) and an American-made leather band.  The watches are powered by a venerable ETA movement and are assembled in the United States.  If you are interested in one of these Minuteman watches, check out them out on the Minuteman website.
Posted by GatorDude at 12:00 AM No comments:

Comrade watch collectors this week will once again be dedicated to Russia-themed watches.  I haven't been hacked.  It's just that Russia has been on the news very much lately.  Naturally, there are watches out there to celebrate Russia's "Yuge" achievements.  On October 4,  1957, the Soviet Union launched Sputnik.  It was the first man-made satellite to orbit the Earth.  It was a major technological achievement and it ignited the space race between the U.S. and Soviet Union.  If you want to get all multimedia, here is what NASA believes transmissions from Sputnik sounded like and the picture below is a mockup of Sputnik. 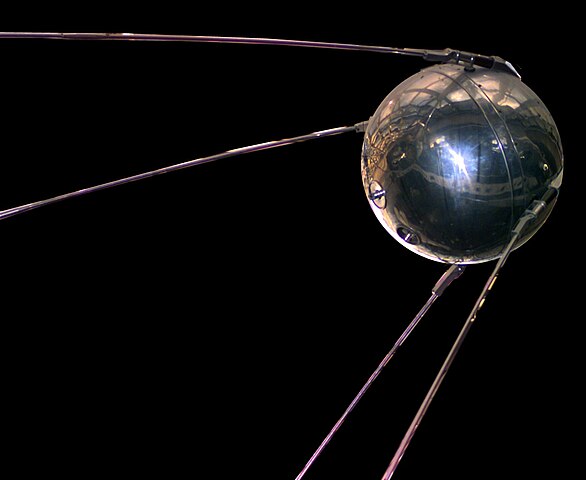 With the 60th anniversary of the launch coming up, it's interesting to look at some of the watches used in the Soviet space program and some of the watches that commemorate Russian and Soviet achievements in space. The company that made the watches worn by cosmonauts still exists and still makes fine mechanical watches.  Many watches celebrate Yuri Gagarin the first man in space.


Amazingly, there are also now watches made in China that pay homage to old Soviet watch styles and watch companies.  In searching on Amazon, I'm not quite sure if these are created by actual Russian designers, Russian companies who have outsourced production, or Chinese companies pretending to be Russian.  Nevertheless, some of the watches that I've seen from a company called CCCP Time that look really good.

One of the most affordable Russian-style watches is a Sturmanskie watch assembled in China using a Japanese Miyota quartz movement.  It closely mimics the style of the original Sturmanskie watch worn by Yuri Gagarin. 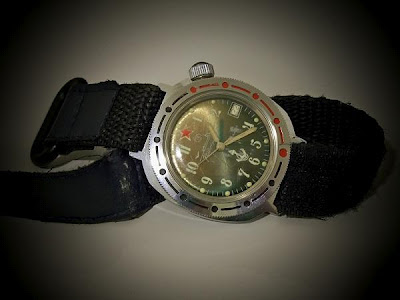 During the Cold War, American and Soviet submariners used to stalk each other quietly under the sea.  The Russians hoped to use their submarines to neutralize America's military advantage in aircraft carriers.  Both countries used increasingly sophisticated attack submarines in a desperate attempt to track the other's "boomers" which carried nuclear ballistic missiles for potential use in a nuclear showdown.

When I strap on my submariner's watch, I feel like I have a little Hunt for Red October occurring right on my wrist.

Today, Russia is a resurgent super power that is flexing its muscle all over the world.  From "little green men" encroaching on Ukraine to low flying fighter jets buzzing this U.S. Navy destroyer, the Russians are a force to be respected.  Under Vladimir Putin's rule, Russia is even more unpredictable than the old U.S.S.R.  Where stodgy party officials once made decisions for a monolithic state, today's Russia has a leader with wily KGB credentials and a bias for action.


In the real world, this means politicians shouldn't try to have amateur private servers, use "Password1234" to secure their email, use Russian financing for investment deals, or sign up for speaking engagements with Russian propaganda papers.  Under the leadership of watch collector Vladimir Putin, modern Russia is more than a little edgy.  Today's Russia is downright dangerous when crossed.  When you strap on a Russian Vostok Amphibian watch, you can capture just a little bit of that danger for your wrist.

Amazon offers a wide selection of Vostok mechanical watches at attractive prices.  For less than $100, you can get a genuine Russian military watch with 200 meters of water resistance, a well-made mechanical movement, and a history dating back to the cold war.  Vostok watches are just plain cool.  But, act fast, with all the controversy surrounding Russia and western election tampering and conflict in the Middle East, you never know if sanctions will someday be enacted against Russia.

The Sad Saga of My Seiko Kinetic Watch

I recently dug deep into my vast warehouse of seldom used watches.  I found a Seiko Kinetic watch that I received a couple of years ago.  When I tried it on at home, I thought that the bracelet was a tad too loose and vowed to take it to a jeweler for adjustment.  Of course, weeks and months rolled by and I never did anything with the Seiko.  In retrospect, I should have.


When I set the Seiko Kinetic watch aside, I thought it was a mechanical watch just like any other mechanical watch.  But, I was wrong.  It's a rather unusual hybrid watch.  The Seiko Kinetic has a rotor that charges a battery or capacitor as it is wound.  Once wound, the battery is supposed to give months of service.  The accompanying manual gave instructions for shaking the watch from side to side and up and down to provide the initial charge.  Then it advised wearing the watch continuously for 10 hours.  If the charge is low, the Seiko Kinetic watch will advance two seconds at a time. 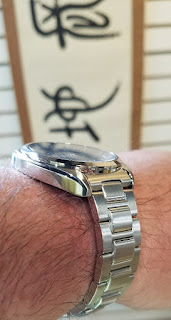 Unfortunately, my Seiko Kinetic Watch never really got going.  I could shake it and wear it and within a few hours it would be taking two seconds at a time in a strange stutter step and slowly losing time.  As it turns out, the Seiko Kinetic watch battery can go dead after a long period of not being used.  This ehow article Problems with a Seiko Kinetic Watch outlines some of the issues with the watch. 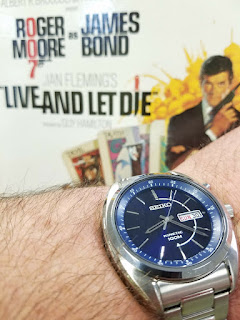 What will happen to my Seiko Kinetic?  I suppose it will sink back into the far recesses of my warehouse.  One day, I might take it to a service center.
Posted by GatorDude at 12:30 AM 2 comments: