It's late October and All Hallow's Eve draws closer and closer.  Each tick of the second hand and each move of the minute hand brings the spookiest night of the year just a little closer.  It time to reflect upon timepieces and wonder if there were a timepiece that might better reflect the dark autumn mood.  In my own collection, the bright face of my latest Casio doesn't quite throw a fright in anyone's bones. 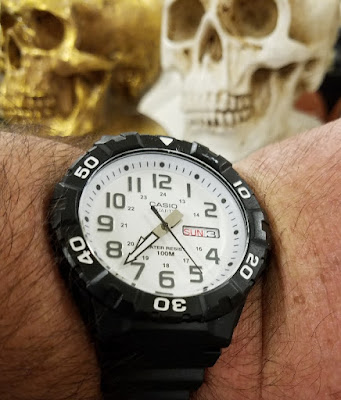 There are some fiendish watches available to watch collectors and enthusiasts.  I did a quick survey of Amazon and came up with a couple of frightful timepieces.  The first is the Montegrappa Chaos Watch which is reputed to have been designed by Sylvester Stallone.  It's an expensive, high end, timepiece with a rather unusual design.  The Montegrappa Chaos Watch isn't for everyone, but if you like skulls and a rather dark design, the Chaos Watch might be your choice!

At a more affordable end of the horological spectrum, I found this Pagani Skull Watch waiting for an unsuspecting teller of time.  It's a nice clean design with a skull in the center of the dial.  It's bad ass.  But, I suspect the wearer gets a bit of a fright every time he glances at his wrist.